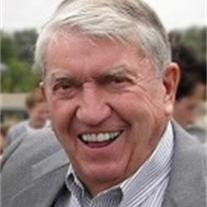 Rev. Bill Gwinn July 16, 1929 – April 17, 2009 William Douglas Gwinn (known as “Bill” by all his friends) was born on July 16, 1929 in Seattle, Washington and died on April 17, 2009 in Palm Springs, CA. He is survived by his wife of 58 years, Colette; his four children, Melissa (and her husband, Phil) Assink, Doug (and his wife, Linda) Gwinn, Casey (and his wife, Beth) Gwinn, and Jenny (and her husband, Chris) DeFrates; his seven grandchildren (Jonathan, Zachary, Kelly, Karianne, Christopher, Dane, and Daisy); and his sister Barbara (and her husband, Alex) Antes. Bill graduated from Roosevelt High School in Seattle in 1946. He graduated from Whitworth College in 1950 and received his Masters of Divinity from Fuller Theological Seminary in 1953. Bill began his ministry as a Youth Minister at Lake Avenue Congregational Church in Pasadena, California in 1953. In 1957, he moved to Mount Hermon Christian Conference Center to serve as the Program Director. He later became the Executive Director and served at Mount Hermon until 1978. He moved on to become the pastor of Plymouth Congregational Church in Whittier, California from 1979 to 1987. He also served Interim Pastorates in Buena Vista, Colorado; Pearl City, Hawaii; and Hanalei, Kauai. Between 1990-2006, Bill remained active in service to Jesus Christ as a Chaplain at Outdoor Resorts Recreational Park in Cathedral City, California. Over the years, Bill served on the school board of San Lorenzo Valley School District in Felton, California; the Board of Trustees of Westmont College in Santa Barbara; the Board of Trustees of Forest Home Christian Conference Center; the Executive Committee of Christian Camping International; and in volunteer leadership roles with the Conservative Congregational Christian Conference, the Christian Conciliation Service of Los Angeles, Bible Study Fellowship, Talbot Seminary, the California Council of Alcohol Problems, the National Association of Evangelicals, and the Hospital Chaplains Ministry of America. A memorial service in celebration of Bill’s life of faith in Jesus Christ will be held Tuesday, May 12, 2009 at 2PM in the Auditorium at Mount Hermon Christian Conference Center (www.mounthermon.org). In lieu of flowers, the family requests memorial gifts be given to Mount Hermon Christian Conference in memory of Rev. Bill Gwinn. Gifts may be sent to Mount Hermon Christian Conference Center, Book of Remembrance, P.O. Box 413, Mount Hermon, California 95041. The family may be contacted through his son, Casey, at [email protected]

The family of William Douglas Gwinn created this Life Tributes page to make it easy to share your memories.