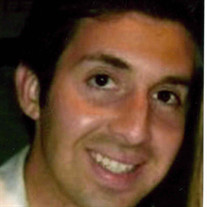 It is with great sorrow that the family of Ryan Allen Graham shares his unexpected passing. He was born August 8, 1985 in Redlands, Ca and entered into rest on October 11, 2017 in Redlands. Ryan grew up in Yucaipa and was a well known athlete. He started in sports at the age of 5 in soccer and baseball and continued in Yucaipa Little League for 11 years. He made the all-star team as a pitcher for 8 of those years. Along with baseball, he played football as a freshman for Yucaipa and received the award of outstanding receiver. In spring of his sophomore year he made the decision to leave baseball and focus on track and cross country. That is where he achieved great success. He holds the record in the 800 meter at 1:54.4 and advanced to state finals. He held the 1600 meter record for 10 years at 4:17.8. He was awarded Athlete of the Year as a senior and also received the prestigious Ken Hubbs Award nomination for Yucaipa High. Ryan was granted a full tuition scholarship and graduated with a bachelors degree in psychology. He obtained employment as a Behavioral Therapist to work with children with Autism. His extensive training in Applied Behavioral Analysis helped him to succeed in his chosen field. His study and understanding also helped him to concluded he was on the Autism Spectrum. He was 22 and his life now made sense to him, and his family. Because throughout Ryan's years of success, he suffered from depression and anxiety due to this disorder. He struggled immensely with social interaction, and other symptoms. As his depression progressed, his life became more difficult but he lived as best he could. Ryan is now at peace and free of pain. We remember his great love of music, his pleasure of politics (sending out text messages to his dad on the latest political drama!) visiting and sharing a great tv show with his mom, and his enjoyment of his pup Jenkins. We remember his extremely joyful childhood with his sister and his love of competition. Ryan is survived by parents Mark and Gina, sister Lindsey, grandparents Marie Gomez, Harold and Elva Allen, aunts Tammy Tavolacci, Lisa Estrada, Julie Allen, Frances Ozbolt, Shannon Oliva, uncles Manny Oliva, Al Estrada, Anthony Ozbolt, cousins Ricky and Jonathan Tavolacci, Kaitlyn and Garrett Oliva and many many more family members. He is preceded in death by his grandfather Manny Oliva and uncle Richard Tavolacci. Services will be at Desert Lawn Memorial Chapel on Fri., November 3 at 10:30 am followed by a remembrance reception at Yucaipa Community Center. Please remember Ryan as one who really just wanted to love and be loved. Ryan you are FOREVER in our hearts.

It is with great sorrow that the family of Ryan Allen Graham shares his unexpected passing. He was born August 8, 1985 in Redlands, Ca and entered into rest on October 11, 2017 in Redlands. Ryan grew up in Yucaipa and was a well known athlete.... View Obituary & Service Information

The family of Ryan Graham Allen created this Life Tributes page to make it easy to share your memories.

It is with great sorrow that the family of Ryan Allen Graham...

Send flowers to the Allen family.