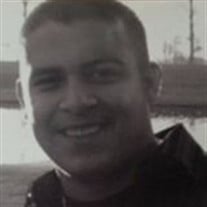 Nicolas was born on August 26, 1990 at March Air Force Base in Riverside California. He grew up in Yucaipa California. Nicolas attended Yucaipa Elementary School, Parkview Middle School, and Green Valley and Yucaipa High Schools. When Nicolas turned 19 years old, he moved to Santa Maria California where he earned his High School diploma and attended Allan Hancock Community College. Nicolas grew up to be a responsible, ambitious young man. He excelled in academics and worked full time to support his way through school. Nicolas was diagnosed with cancer in January 2014. The cancer was determined to be at a very early stage for which he underwent surgery. His treatment consisted of monitoring with CAT scans every 6 months. Nicolas started feeling ill in the last month and scheduled his 6 month follow up CAT scan. He came to find out just two days before his passing that the cancer had spread and invaded his vital organs. As he began to get ready to start treatment the following week, Nicolas died unexpectedly at the movie theater in company of his brother and friends. Anyone that ever met Nicolas would tell you that he had a very charismatic personality and loved to always be around people. Nicolas had the ability to attract others towards him. During his time in this life, Nicolas was able to develop genuine lifelong relationships. If Nicolas considered you his friend, you knew that you had a genuine friend for life. Nicolas was the kind of person that if your car broke down, if you needed to borrow clothes, or if you needed help putting a piece of furniture together, he would literally drive hundreds of miles to help you. All his family members, friends, co-workers, and classmates loved him. And Nicolas returned that love abundantly to those around him. Nicolas had dreams of becoming a Motion Picture Cinematographer. He was well on his way to achieving that goal. He was less than a year from graduating college when he passed. Nicolas was a very bright young man with an outgoing personality. Not only did he excel in academics, but he also possessed a technical aptitude in terms of working with mechanics and electronics. The kind of aptitude needed to have success in a technical career. Sadly Nicolas has left us, but his dreams and ambitions as well as the love he had for all of us will live on in all of our hearts. Nicolas is survived by his Mother Yesenia, Father Tom, Brothers Leonardo, Enrique, Robert and Michael, Step- Mother Christy, Grandparents Maria, Joyce and Michael,Loving sister Brittney, Precious God Son Jacobo, Uncles David, Shane and Jimmy, and Aunts Jennifer and Michelle along with many very close friends whom he considered brothers and sisters.

The family of Nicolas Dedier DeCasaus created this Life Tributes page to make it easy to share your memories.

Send flowers to the DeCasaus family.