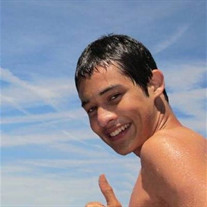 Michael Anthony Bowen-Alba, 19, of Mira Loma passed away in his sleep in the early morning hours of August 19, 2014. He was born to Tomasa Bowen and Michael Alba on May 13, 1995 in Chino Ca. Michael went to Yucaipa High school. Michael was currently enrolled at Chaffey Community College and was planning to enlist in the United States Marine Corp next year. He wanted to serve his country just like his Grandpa Mike had when he served in Vietnam. Michael's hobbies included racing BMX, playing football, paint balling, and riding his Banshee in the desert with friends. Michael was always up for an adventure and this was especially true when it came to food. A recent food adventure included eating chicken feet and pig intestines with his Nina Gladis at a Korean BBQ restaurant. Michael was obsessed with learning and was always researching odd facts. Sometimes he could come across as a "know-it-all." Might even be the reason that his nickname with his friends became "Wizowski." Michael is survived by his mother, Tomasa Richmond and his step-father, James Richmond, his father, Michael Alba, his sister Palani Richmond, his maternal grandfather, Michael Bowen and his wife Janise Wallwork, his paternal grandparents Tony and Rachel Alba, his Uncle, Douglas Bowen, his Auntie Shelia and Uncle Rick Rodarte, his Aunt Trisha Marcellus, his cousins, Natalie Rodarte and Ava Marcellus along with countless other friends and family whom were blessed to know him. He was proceeded in Death by his Maternal Grandmother Marcella Bowen. Take comfort in knowing that this is not where it ends..we will see him again. So you have pain now; but I will see you again, and your hearts will rejoice, and no one will take joy from you. John 16.22 We will be celebrating Michael's life on: September 6, 2014, 10:00 a.m. Desert Lawn Memorial Park 11251 Desert Lawn Dr. Calimesa, ca 92320 Reception to immediately follow at: Yucaipa Masonic Center 13669 California St. Yucaipa, Ca 92399

Michael Anthony Bowen-Alba, 19, of Mira Loma passed away in his sleep in the early morning hours of August 19, 2014. He was born to Tomasa Bowen and Michael Alba on May 13, 1995 in Chino Ca. Michael went to Yucaipa High school. Michael was... View Obituary & Service Information

The family of Michael Bowen created this Life Tributes page to make it easy to share your memories.

Michael Anthony Bowen-Alba, 19, of Mira Loma passed away in his...

Send flowers to the Bowen family.