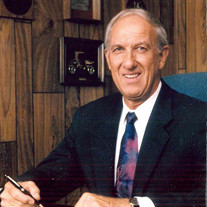 Marvin Eugene Oliver, age 87, of Calimesa, California, passed away on November 30, 2019. Marv is survived by his loving wife, Dixie; his daughters, Tammy Dawn Custer and husband, Michael, of Cherry Valley, and Teri Profeta and husband, Mark, of Chula Vista; granddaughter, Christa Benito and husband, Raysan, granddaughter, Courtney Trinidad and husband, Carmelo, grandson, Mark Profeta; and great-grandson, Micah Benito. He is preceded in death by his parents, James “Everett” and Besse Oliver (nee Potts), and brothers, Richard, Jack, Tommy, and Johnny Oliver. Marv was born in Carterville, Missouri, on January 30, 1932. From a young age, Marv had a faith in Jesus Christ. Growing up, he and his brothers, “The Oliver Boys,” sang gospel songs at various churches in the Four-State District. He attended Alba High School in Alba, Missouri, where he was on the basketball team. In high school, he met the love of his life, Dixie Williams. He joined the Navy in 1952, where he was a jet engine mechanic at NAS Miramar in San Diego, California. While in the Navy, Marv and Dixie were married on July 11, 1954, in Webb City, Missouri. They lived in San Diego after they were married. Upon receiving an Honorable Discharge from the Navy, Marv earned his Bachelor of Business degree from San Diego State University. Soon after graduation, Marv began his life’s work as an insurance agent and later district manager for State Farm Insurance. The Olivers attended First Assembly of God Church in San Diego, where they made lifelong friends. The family moved to Riverside, California, in 1974, where Marv continued his work with State Farm. Marv and Dixie moved to Menifee, in 1998, where he was known as “Menifee Marv” on a local morning radio show, providing the weather conditions at Menifee Lake. Marv retired from State Farm in 2002. After retirement, he enjoyed visiting nursing homes and delivering the Daily Bread booklet for the residents. Marv and Dixie attended Calvary Chapel Murrieta for 14 years. Marv was extremely proud of his family and enjoyed going on family vacations and spending time with his grandchildren, who called him “Papa.” His hobbies included fishing, biking, coaching Little League, traveling, and, most of all, spending time with Dixie. Marv was known to be hard-working, dependable, generous, grateful, clever and wise. He will be desperately missed by his family and friends, but we are confident we will see him again in Heaven. “Well done, good and faithful servant”... Matthew 25:21a Memorial service on Monday, December 23rd, 2019, at 1p.m., Bonita Adventist Church, 3737 Sweetwater Road, National City, CA Interment with military honors, Riverside National Cemetery, Thursday, January 2, 2020, 11 a.m. In lieu of flowers, please donate to Make-A-Wish in memory of Marvin Oliver at OCIE.wish.org

The family of Marvin Eugene Oliver created this Life Tributes page to make it easy to share your memories.

Send flowers to the Oliver family.