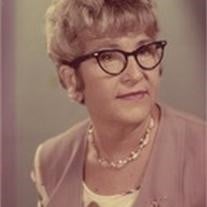 Marcia Di Carlo Szecsy went to be with her Lord on August 8, 2009. Marcia was born to John and Marion Steffens in Wellington, Kansas on November 27, 1917. The family moved to California when Marcia was quite young and she attended and graduated from San Bernardino High School. She has always enjoyed sports and played on the tennis team while in high school. She met and married Tony Di Carlo shortly after high school. Tony was the son of one of the original grape growing families in the Rancho Cucamonga area, and Marcia enjoyed raising their two children, Nick and Saralee, in the country atmosphere of Etiwanda. She was active in the community being a Cub Scout Den Mother and P.T.A. President. She also belonged to Sons of Columbus Council #92 of Ontario. Her home was always open to her children’s friends and Sunday meant a big pot of spaghetti to feed anyone who showed up. She loved people and especially her family. She was known for her sparkling eyes and beautiful smile. Tony Di Carlo died at a young age and Marcia married Ferenc Szecsy. They moved to Banning where they could raise some animals and Marcia could continue to enjoy the rural life. Frank and Marcia loved to dance and enjoyed many a Sunday with their friends at the Hungarian Club. Marcia was still showing off her dance steps at 90 years old. She had gotten involved in real estate and had a broker’s license which kept her active into her later years. Another activity that she loved was bowling. She and her daughter bowled together in Banning and Redlands until Marcia was eighty years old. Marcia was preceded in death by her mother and father, her sister Mary Dotson and her brother Rev. George Steffens. She is succeeded by her son Nick Di Carlo (wife Irene) of Portland, OR, daughter Saralee Duffy (husband Don) of Upland, CA. She has eight grandchildren: Michael Duffy(wife Brenda), Mark Duffy(wife Cindy), Dawn Duffy, Cathy Haus(husband Steve), Marci Di Carlo, Nicki Mattecheck, Toni Di Carlo, Mary Di Carlo, seven great-grandchildren, and three great-great-grandchildren. Viewing will be held on Monday, August 17 from 11:00am – 12:00pm at Desert Lawn Funeral Home 11251 Desert Lawn Drive, Calimesa, CA 92320 which is along side the I-10 Freeway. Funeral Service will start at 12:00pm. In lieu of flowers donations are to go to: Life Bible Fellowship Church/General Fund, 2426 North Euclid, Upland, CA 91784, in memory of Marcia Di Carlo Szecsy. Services entrusted to the care of Desert Lawn Funeral Home, Calimesa, CA

Marcia Di Carlo Szecsy went to be with her Lord on August 8, 2009. Marcia was born to John and Marion Steffens in Wellington, Kansas on November 27, 1917. The family moved to California when Marcia was quite young and she attended and graduated... View Obituary & Service Information

The family of Marcia Carlo Szecsy created this Life Tributes page to make it easy to share your memories.

Marcia Di Carlo Szecsy went to be with her Lord on August 8,...