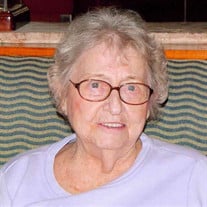 Hattie Frances Miller completed her lifelong journey and was called home to be with her LORD on Wednesday, February 1, 2017. She passed away at Paradise Living for the Elderly in Garden Grove, CA at the age of 94 years. Mrs. Miller was born on March 29, 1922 the daughter of Charles Franklin and Hattie Annie (Anna) (McCollum) Atwood in Severy, Kansas, the second of five children. She met her husband Richard Bollen Sanders in Kansas and then followed him to California to be married in Van Nuys on July 11, 1945. They moved to Desert Hot Springs, CA. in 1972 where she lived at Sam’s Family Spa until 2012, when she moved to Stanton, CA. to be with her daughter and son-in-law. Her husband Richard preceded her in death on October 21, 1981. Later she met and married Vernon Alfred Miller on April 21, 1991 who also preceded her in death on December 24, 2010. She worked at Boeing during WW II in the tool crib, also as a Practical Nurse, and at Sam’s Family Spa in many capacities; but mostly she cared for her family and while still in good health, enjoyed sewing and cooking for family gatherings. Hattie is survived by her sister Vera Jones of Valley Center, KS; two daughters Charlene A. and husband Ron Holt of Stanton, CA; and Irene M. Yamaguchi of Oxnard, CA; one son Eldon R. Sanders and wife Lori G. Sanders along with two step-daughters, Debbie and husband Gerry Dueck of Pacifica, CA; and Lori and husband Brad Harmon of Moscow, ID. Grandchildren are Ronnie A. Standridge Jr. and wife Cecile of Norwalk, CA, and Dawn E. and husband Matthew Segawa of Palm Desert, CA. And step-grandchildren, Eric, Stephen and Nathan Dueck and Benjamin and wife Corinne Harmon and Bethany and husband Justin Kuska. She also has Great Grandchildren Catherine C. and husband Erik Olsen, Michelle A. Standridge and Richard O. Standridge, Theodore W. Segawa, and step-great grandchildren Ezra Harmon and Aria Harmon and Cayden Kuska and Kaiya Kuska along with many nieces and nephews. She was also preceded in death by her brother, Charles Morris Atwood of Kansas, sister Lola Joyce Johnson of Kansas, and brother Howard Roy Atwood of Oklahoma; as well as step-grandson Johann Dueck. Funeral Services will be held at Noon Tuesday, February 7, 2017 at Desert Lawn Funeral Home & Memorial Park, 11251 Desert Lawn Drive, Calimesa, CA 92320. Burial will follow immediately in the Memorial Park. Friends may call at 11 a.m. for viewing prior to the service.

Hattie Frances Miller completed her lifelong journey and was called home to be with her LORD on Wednesday, February 1, 2017. She passed away at Paradise Living for the Elderly in Garden Grove, CA at the age of 94 years. Mrs. Miller was born... View Obituary & Service Information

The family of Hattie Frances Miller created this Life Tributes page to make it easy to share your memories.

Hattie Frances Miller completed her lifelong journey and was...

Send flowers to the Miller family.