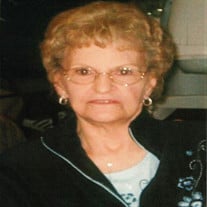 Gloria Marie was born in Henrietta, Oklahoma, on October 17, 1930, to Shird Daniel & Margaret Kelton. with her parents and her siblings, Virginia, Dorthey, Shird, and Bob Kelton settles in Torrance, CA where they were all raised. Gloria Marie graduated from Torrance High School in 1948, where she met Robert (Bob) Jones. They later married and had 3 children, Deborah Lee in 1950, Christine Lyn in 1952 and Mark Daniel in 1956, and continued to live in Torrance, CA. Her and Bob Later divorced in the early 1960's. Gloria Marie reconnected with Gene Hodge, and they married in 1966. Gene retired from the US Air Force in 1974 and they settled in their home in Yucaipa, CA. After Gene passed away in 1992, Gloria found the courage to finalize her education, where she became guidance counselor, specializing in child psychology. She worked at three different elementary schools and during her time there, she was inspired to write 3 books!! Over the years, Gloria Marie remained close to her children and family. Gloria Marie had a love for dogs and cats, she rescued many over the years. she also had a great love for country music, especially Glen Campbell and Kenny Rogers. She would travel to Laughlin and Las Vegas to see them in concert and play the slots whenever she could. Gloria Marie had a great passion for sewing crocheting, painting, and ceramics. She loved to collect Carousel Horses, stuffed Beanie Babies, ceramics of all kinds and Hummel's (figurines from Germany). She loved to drink Sweet Tea, Cherry Coke and Dr. Pepper where she enjoyed sitting in her favorite blue chair. She lived her remaining years in Yucaipa, CA until she passed away 15 days after her 90th birthday, at 1:43 AM Sunday morning on November 1, 2020. Gloria Marie is survived by 3 children, 7 grandchildren, 15 great grandchildren, and 3 great-great grandchildren. She is preceded by her husband Gene, Sister Virginia, Sister Dorthey, Brother Shird Kelton, and grandson Jeffery Chase.

Gloria Marie was born in Henrietta, Oklahoma, on October 17, 1930, to Shird Daniel & Margaret Kelton. with her parents and her siblings, Virginia, Dorthey, Shird, and Bob Kelton settles in Torrance, CA where they were all raised. Gloria Marie... View Obituary & Service Information

The family of Gloria Marie Hodge created this Life Tributes page to make it easy to share your memories.

Gloria Marie was born in Henrietta, Oklahoma, on October 17,...

Send flowers to the Hodge family.