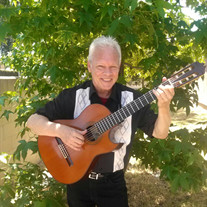 Frank John Sibley was a kind, caring, and loving son, brother, husband, father, and grandfather, who had a lifelong passion for music and teaching. Following a brief battle with a terminal illness, Frank left this world peacefully, and far too soon, on July 11, 2018 surrounded by his family. Frank was born on May 31, 1945 in Montebello, California to Frank and Shirley Sibley. Frank, and his only sister Pamela, enjoyed a happy childhood surrounded by their parents and extended family. When Frank was in high school, the family moved to Long Beach. After completing high school, during the Vietnam War, he was drafted into the U.S. Army where he was fortunate to serve his country in Germany. Frank was a lifelong learner. He earned his Bachelor’s degree in Philosophy and later he and his sister (also a teacher) went on to earn their Masters’ degrees in Education. He was a published author and avid reader who was constantly striving to increase his knowledge. He was a professional musician who enjoyed many genres of music, including jazz and classical. Later in life he developed an interest in studying the piano, which would have made his father proud. His composer of choice was Bach and he spent many hours practicing his music. For more than 30 years, Frank enjoyed a career with the Orange Unified School District, initially as a traveling elementary school music teacher and later as a classroom teacher. During his career, he loved coordinating and putting on Christmas programs, which were loved by his students and their families. He also went to each school and taught music weekly. His influence instilled a lifelong love of music in many of his students, both in school and in his home, where he taught private music lessons for many years. Following his retirement, he continued to share his love of music as a member of the worship team at Hope Community Church of Anaheim, where he played guitar and taught Children’s Church. Frank was the loving husband of his wife Donna for almost 32 years. He was preceded in death by his parents. Frank is survived by his sons Terry John Sibley and Jonathan Sibley, daughters Kristine Bramble and Melissa Husted, sister Pamela Hays, grandsons Matthew Alayra, Nicholas Alayra, and Zachary Alayra, granddaughters Katie Ward, Megan Ward, Emily Ward, and Samantha Husted, niece Amy Sonksen, and nephew Michael Sonksen. Friends and family are welcome to attend a celebration of Frank’s life on Monday, July 23, 2018, at 11:00 a.m. at Desert Lawn Funeral Home and Memorial Park, 11251 Desert Lawn Drive, Calimesa, California, 92320. Frank will be forever in our hearts and deeply missed. May he smile down on us from his heavenly home.

Frank John Sibley was a kind, caring, and loving son, brother, husband, father, and grandfather, who had a lifelong passion for music and teaching. Following a brief battle with a terminal illness, Frank left this world peacefully, and far too... View Obituary & Service Information

The family of Frank John Sibley created this Life Tributes page to make it easy to share your memories.

Send flowers to the Sibley family.