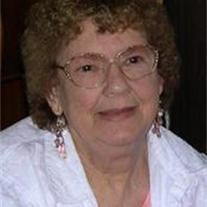 Florence Marie (Garrison) Penrod, 80, passed away April 14, 2013 in Cherry Valley after a long illness. She was the youngest child of Jess and Helen Garrison and was born in her parent’s home outside Healdton, Oklahoma on January 7th, 1933. Marie moved with her parents and siblings to the Coachella Valley in 1936 where the family worked as farm laborers. Marie worked in the peach orchards both as a laborer and later as an orchard owner. She worked 15 years at Hadley Fruit Orchards in Cabazon. It was among the peach trees that she met her future husband, Doug Penrod. Marie and Doug raised pheasants, chukars, Christmas trees and peaches on their properties in Cherry Valley, and beef cattle on their ranch in Arkansas. After their marriage, Doug and Marie moved back to the Coachella Valley where they farmed and began to raise their growing family of 3 boys and twin girls. In 1966 they moved to Cherry Valley and then to Arkansas in 1995. The couple celebrated their 63rd wedding anniversary in October of 2012. Marie loved to read but hosting family events was her true gift and passion. Many happy times were shared with her family and friends at the farm in Cherry Valley. She is survived by her husband, Doug and five children, Ray (Kelley) Penrod of Indianapolis, Indiana, Mike Penrod and Roger (Sharon) Penrod of Cherry Valley, Cookie (Billy) Hargus of Beaumont, Candy (Steve) Crane of Orland, California, ‘adopted’ daughter Tammy (Curt) Salley of Cherry Valley, and sister Lois Jenkins of Upland, California. Her parents, two brothers and four sisters predeceased her. She also leaves behind 22 grandchildren, 33 great-grandchildren and 1 great great granddaughter. Services will be held at graveside in Desert Lawn Memorial Park, 11251 Desert Lawn Drive, Calimesa at 2:30 PM on Friday, April 19, 2013. Viewing will be from 1:00 to 2:00 PM prior to the services.

Florence Marie (Garrison) Penrod, 80, passed away April 14, 2013 in Cherry Valley after a long illness. She was the youngest child of Jess and Helen Garrison and was born in her parent’s home outside Healdton, Oklahoma on January 7th,... View Obituary & Service Information

The family of Florence (Garrison) Penrod created this Life Tributes page to make it easy to share your memories.