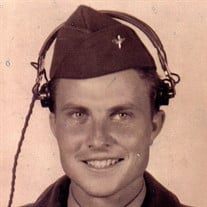 Daniel D. Brown, Sr. passed away February 17, 2016, to be reunited with Kathryn E. (Staples) Brown, his wife of sixty-four years, who preceded him in death July 9, 2010. Born in Pleasant Heights, East Liverpool, Ohio, May 25, 1923, the eight of eleven children of Martin Amberry and Leona Mae (Dornan) Brown. He is survived by a daughter Suzan W. Waterhouse (Jon) of Yucaipa, and sons Daniel D. Jr. (Georgina), John A. (Leslie) of Ohio, Robert E. (Jennifer) of Yucaipa, a brother Philomen D. Brown, of Antioch, Illinois, a sister Violet G. Meslovick of Oregon, 12 grandchildren and 19 great-grandchildren. That being said the particulars of a man's birth and death or who survived him, seldom are enough to tell the story of a life: what he was or what he meant to those left behind. Our father was part of a generation fast disappearing, treasures to appreciate, sometimes called the greatest generation. It is a firm belief those never introduced to our father missed meeting one of the great characters of the twentieth century. Joining the Army Air Corps in WWII and flying with the 13th Air Force he survived five plane crashes. Given a history of daredevil behavior once flying a B-25 beneath the old Newell bridge buzzing East Liverpool to let his mother know he was home, I suppose crashes were to be expected. The fifth crash gave rise to the rumor he'd requested the Emperor of Japan pension him as a Japanese Ace. His second war was Korean though for someone who'd seen so much of war he rarely spoke about it. Most of his stories involved better memories; where to fine three bottle of Rupert's beer buried in a lagoon in New Guinea. He retired in 1963 as a Major in the United States Air Force. Another war was coming and he said two in one lifetime was enough for any man. The remainder of his life was devoted to his two greatest passions: golf and Kathryn. Throwing himself into the sport he practiced until he was a scratch golfer, built San Bernardino golf course in the mid-sixties. He carded twenty-one holes-in-one. But perhaps his crowning glory was shooting a nine under par twenty-seven at Negley Golf Course. Our mother said if she'd married a farmer instead of a golfer she'd have gotten two more hours of sleep in the morning. But it must have agreed with them both, the marriage lasted sixty-four years until parted by Kathryn's death. In this day and age it's hard to imagine being head over heels in love for that long. This is but a short synopsis of the man who left us. My poor words fail to describe adequately the effect of losing someone so precious. Having survived five plane crashes, being hit by lighting twice and two heart attacks we thought him indestructible. Certainly life will go on. The sun will come up. Birds will gather at the back door wondering where the man who fed them breadcrumbs has gone. The sun will go down. Stars will come out. But I don't think they will shine as brightly.

The family of Maj. Daniel Dale Brown, Sr. created this Life Tributes page to make it easy to share your memories.

Send flowers to the Brown family.