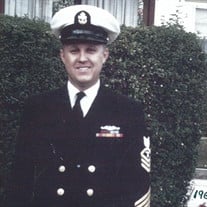 Canning Perry Jones, (Perry) passed away in his home on August 12, 2019 at the age of 90. He was surrounded by his loving family. Perry was born at Redlands Community Hospital on October 9, 1928, though he spent much of his teenage years living in Brooklyn, NY before moving back to Yucaipa, CA. He enlisted in the Navy in 1945 as a Seaman Recruit before converting to Fire Control Technician. After 22 years of dedicated service, with tours on the USS Rasher SSR 269 and CVS Lexington CVA-16, he retired as a FTCC (SS) from US Naval Schools Command, Mare Island. His Navy service was a point of pride and defining aspect of his character. His service was an inspiration for both his children and grandchildren who served their country as well. While a young sailor, he met Patricia Jean Gullord on a blind date and married her on December 27, 1952. Together they had 5 children. After he retired from his Naval service, he and his family moved back to Yucaipa where he worked for GTE for 20 years, after his retirement from GTE in 1988, he and Patricia sold their home and traveled fulltime across the United States. Their favorite places to visit included the White Mountains and Pismo Beach. After the death of his beloved Patricia in 2002, he fell in love with Nancy Impola a feisty Italian who stole the heart of Perry and the entire Jones family. He and Nancy married on May 24, 2008 and continued to travel and enjoy their life together. Perry’s love of travel, maps, and a good spaghetti dinner will forever be cherished by his loved ones. He is survived by his wife, Nancy Jones and their beloved dog Sassy, his children, Pamela Carole (Dennis), Charles Perry, Kenneth Russell (Dede), Janie Anne (Richard) and John Michael (Sandy). Sister Ellabeth (Joy), Brothers Peter, Paul (Keitha). Perry was proud to be Grandfather to 9 and Great-Grandfather to 9. He was proceeded in death by his wife Patricia Jones and Brother Robert Jones Services will be held on August 30, 2019 at 11:00 AM at Desert Lawn Funeral Home, graveside services with full military honors.

Canning Perry Jones, (Perry) passed away in his home on August 12, 2019 at the age of 90. He was surrounded by his loving family. Perry was born at Redlands Community Hospital on October 9, 1928, though he spent much of his teenage years living... View Obituary & Service Information

The family of Canning Perry Jones created this Life Tributes page to make it easy to share your memories.

Canning Perry Jones, (Perry) passed away in his home on August...

Send flowers to the Jones family.