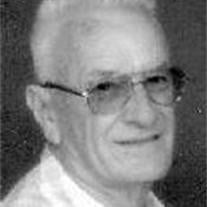 Bob C Follett passed away, and joyfully reunited with his lifelong sweetheart Lucille, Fri June 1st. Burial and graveside services will be held at 11 AM Fri June 22nd at Desert Lawn in Calimesa. The 2nd of five children, Bob was born Nov 3rd, 1920 in Pontiac, Illinois to Charles and Edna Follett. While attending Pontiac High School he was on the football, basketball and track teams and later played on the Air Guard's baseball team at Norton Air Force Base. In July of 1940 Bob joined the Army Air Corp and served in the Pacific Theater during WWII with the 408th Bomb Squadron. After his discharge in 1945 Bob joined the 196th Fighter Intercept Squadron, CA Air National Guard. He retired as a Chief Master Sergeant in 1967 with the 163rd Tactical Fighter Squadron in Ontario. Bob married the love of his life, Lucille Tompkins on Aug 20, 1950 and they became parents of 3 children, Catherine, David and Glen. After his military retirement, they managed the Green Spot store in Mentone. A few years later Bob joined McDonnell Douglas Aircraft Company as a quality assurance inspector, a position that allowed him and his family to travel to Illinois, Iowa, New York, New Hampshire and Kansas. He retired once again in 1975 and settled in Yucaipa. An avid outdoors man, he shared his passion for fishing, hunting and camping regularly with his family and always sought out the "scenic route" on family adventures. Not one to sit on the sidelines, Bob was also an eager Little League Coach, Cub Scout/Boy Scout Pack Master and active PTA member. He shared his endearing S.O.B (Sweet ol' Bob) sense of humor, gentle-hearted teasing and "Love You Mighty" slogan with everyone and was "Loved Mighty" in return. Bob was preceded in death by his wife of 61 years, Lucille and older brother Marshall. He is survived by his children Bob R (Jane) Follett, Catherine (Tom) Stafford, David (Becky Tucker) Follett, Glen (Becki) Follett, 5 grandchildren, 6 great- grandchildren, 3 great-great grandchildren and siblings Betty, Mary Jane and Chuck. In lieu of flowers, donations to the following facilities would be appreciated, Fisher House ~ Helping Military Families http://www.fisherhouse.org/ The Salk Institute for Biological Studies http://www.salk.edu/ Marine Toys for Tots Foundation http://www.toysfortots.org/

Bob C Follett passed away, and joyfully reunited with his lifelong sweetheart Lucille, Fri June 1st. Burial and graveside services will be held at 11 AM Fri June 22nd at Desert Lawn in Calimesa. The 2nd of five children, Bob was... View Obituary & Service Information

The family of Bob Follett created this Life Tributes page to make it easy to share your memories.

Bob C Follett passed away, and joyfully reunited with his lifelong...

Send flowers to the Follett family.