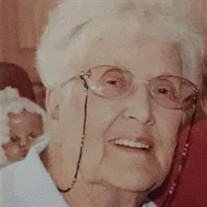 Anne I. Carlson, a 37-year resident of Calimesa, passed away March 4, 2015. She was born Anne Nyberg in Manistique, MI, on February 27, 1919, and grew up in Wisconsin. She married Henry W. Carlson in 1941 and moved to South Dakota in 1947. Henry and Anne were long-time members of the Rapid City Seventh-day Adventist church, and raised their children in Rapid City and other communities in the northern plains. Anne moved to Calimesa with her husband after retirement to be near children and grandchildren. Anne was a dedicated and industrious homemaker and worked many years in the health care and food service industries. She was known for her hard work, loyalty and devotion to family and friends as well as her deep concern for the less fortunate. Mrs. Carlson was preceded in death by her husband, Henry, her parents Walfred (born in Medelpad, Sweden), and Hilda Nyberg (born in Blekinge, Sweden), two brothers, Ingwald and Roy Nyberg, and many friends. She is survived by sons, Timothy Carlson (wife Kathleen) of Bellevue WA, Jon Carlson (wife Linda) of Yucaipa and daughter Judy Giacona (husband Larry) of Calimesa; eight grandchildren (Tad Carlson, Jeremy Carlson, Gretchen Bethrum, Jason Carlson, Kristina Chase, Peter Giacona, Stephanie McGee and Joel Giacona) and ten great grandchildren

The family of Anne I Carlson created this Life Tributes page to make it easy to share your memories.

Anne I. Carlson, a 37-year resident of Calimesa, passed away...

Send flowers to the Carlson family.